How not to cut down a tree!

This is definitely how not to cut a tree down…Well, sometimes me and my friends drink a little to much beer and do dangerous stuff like cutting trees down, by dangling from the tree.. 🙂

This tree was about 50 to 60 feet high, you can barely make out his satellite dish on his garage in the very bottom right hand corner of this picture. 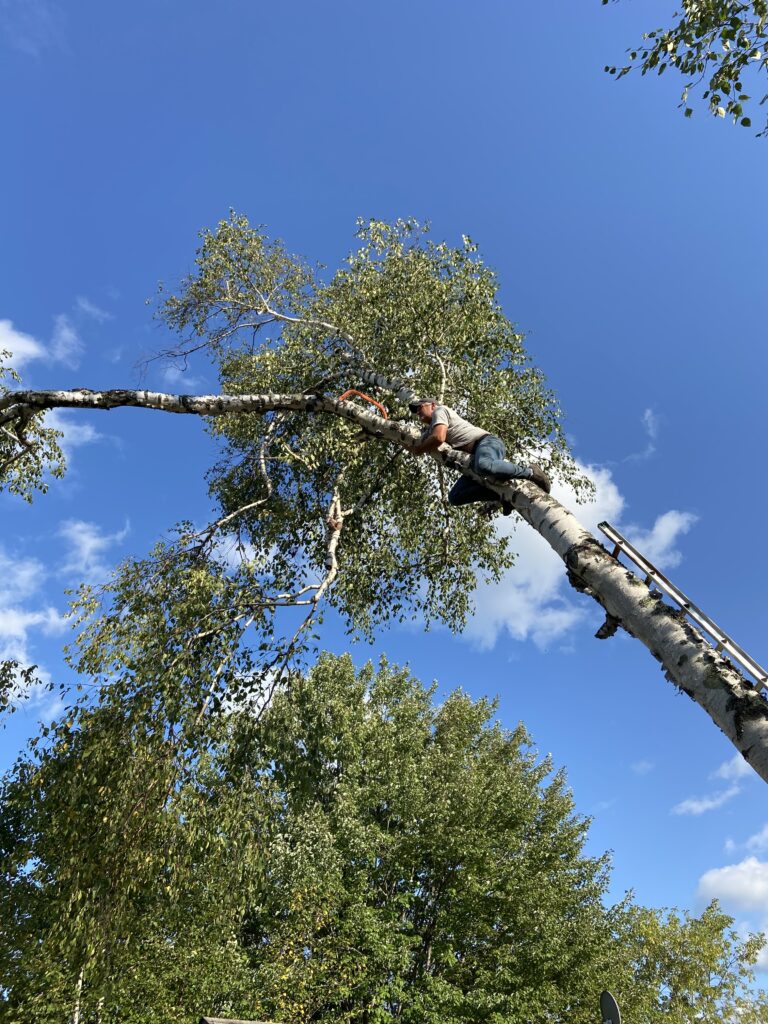 These birch trees were dying.

My friend Dust (Justin Sparby) his brother David and me have done crazy stuff like this all of the time, one minute we will get a bug up our butt, and decide to do something like finally cut down a bunch of birch trees that were dying in his yard.

These birch trees were pretty massive, and were hanging over his house and his garage. Branches were constantly falling off on both his garage roof and house, they were also falling in the neighbors yard.

The neighbor did not care for that to much, he would mow his lawn and then whip the branches back in Justin’s yard.

A couple days before we started cutting these trees down, his neighbor drove by on his lawnmower stopped picked up a branch through it over and said, “your branches your yard!”

There were 4 birch trees all together.

Three of them were pretty HUGE, I could not put my arms all the way around the base of them, the 4th tree was fairly small yet in comparison. I did not take pictures of the other trees as we had already cut them down, I only grabbed the camera because of how Dust had to scale this tree and hang on for dear life to cut a portion of the top part of this tree off with a bow saw.

We really had no choice to get this tree to fall where we wanted it, had to take off that back branch, otherwise it would have crushed the fence below. Neighbor might not have liked that to much.

I knew I wasn’t climbing it, I am too old for that BS..lol

Well, I had already did some dangerous cutting of my own with two of the other trees, as well as his brother David, who helped us cut down two of them. All four of these trees were leaning horribly, and all in the wrong direction, let me tell you..And there was very little space left between his house, garage, shed and fence to drop them.

We had to take down these trees in sections, by climbing the trees and hooking chains up high and then to a truck, then we notched and cut a section and pulled it down with a truck.

We are pretty use to doing stuff like this, but the few beers we drank first might have given us little bit more courage, or should I say STUPIDITY!

But hey, we always get the job done without breaking anything..HA HA!

Here is one more view of Dust in that tree, I think he was posing..lol 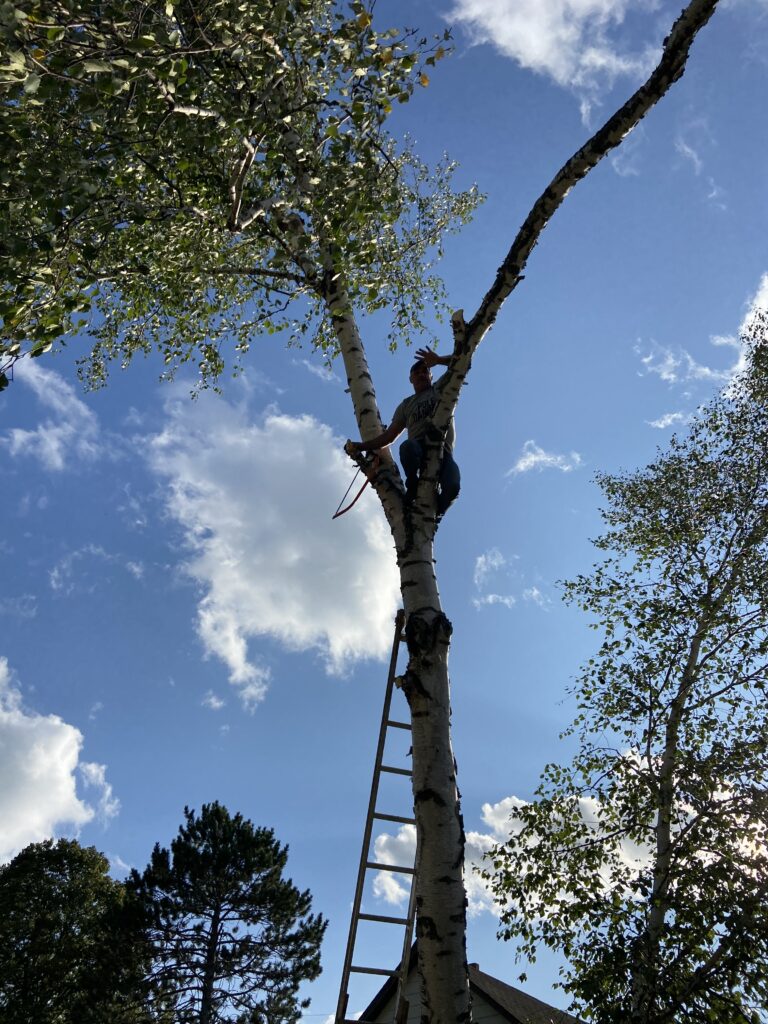 Three of the trees cut and split.

Here is a picture of the pile of wood after cutting up only 3 of the trees, just to give you some kind of example of how big these trees were. We are still in the process of cutting up the rest of the biggest tree. 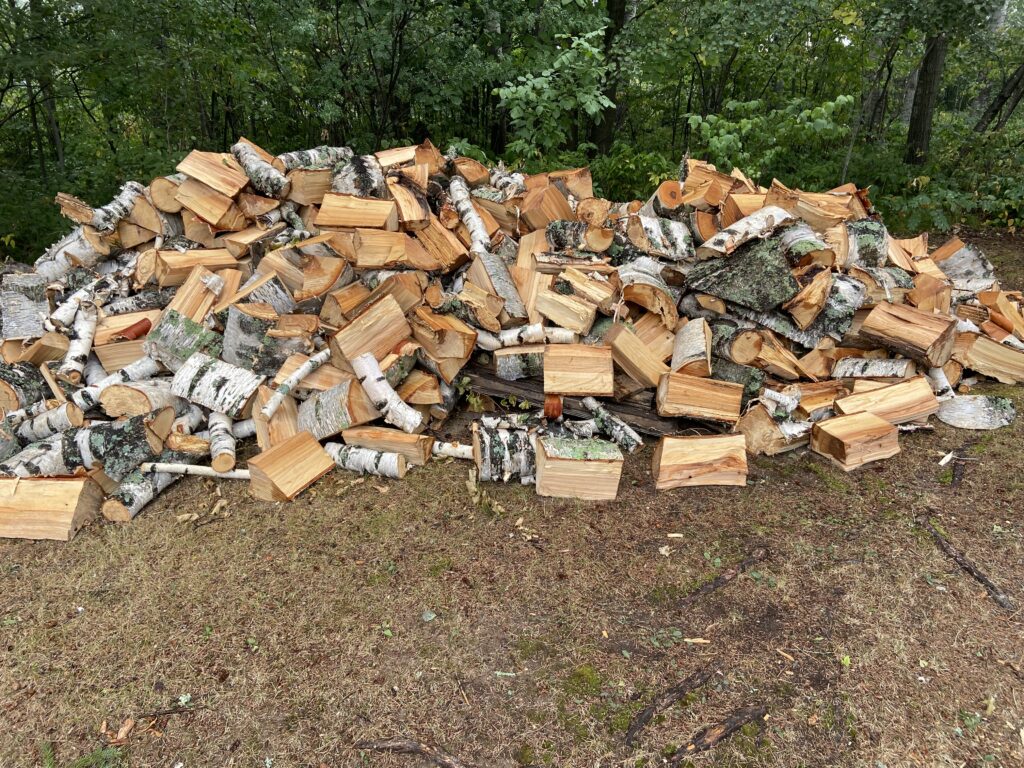 I got to throw this disclaimer in here, as I do not want anyone to think this was safe in anyway, or that drinking beer while doing this was something anyone else should do. Never do this when cutting down a tree.

We do have years of experience in climbing and cutting down trees, the three of us have pretty much done stuff like this our entire lives, and my friend Dust is a commercial roofer, so heights he is not afraid of. And we always have a few beers while doing this stuff, it is second nature to us..lol

Anyway, make sure to just hire some professionals instead of risking your life cutting some dumb trees down, because this is, How not to cut down a tree.. 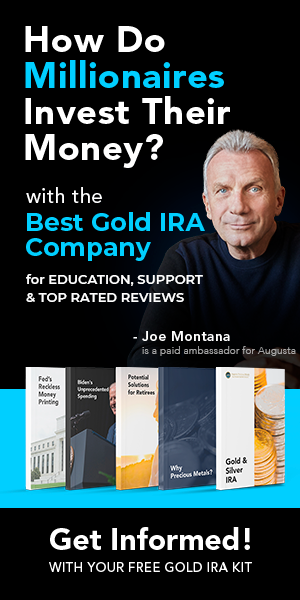